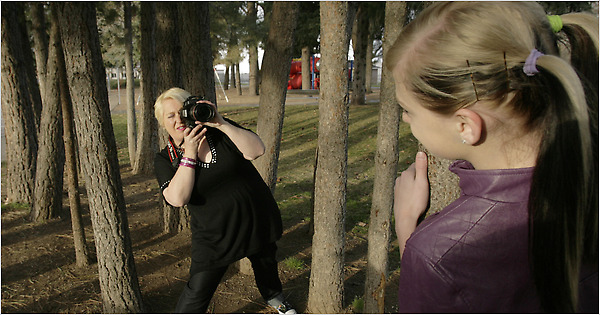 D. Sharon Pruitt, taking photos of her daughter Hayley, is one of a growing number of amateur photographers who earn small fees for their work. From the NYT article referred to below

I’ve written about it before, but the future of professional photography as a solo art isn’t looking any more lucrative than it did several years ago. In fact things are becoming more specialized and “good” is becoming “good enough” for cash strapped newspapers, magazines, print and web venues.

In the NY Times story, “Image of a shrinking path”, talks about how professional photographers are being overwhelmed by the amount of stock images and cheaper competition from amateur photographers who are flooding the market for weddings, portraits and even magazine and print work. The photography market has become overexposed with cheap but quality digital cameras that even those with little or no training can use to make quality images that pass for most customers.

I agree that someone who was looking for a career as a studio, portrait or even journalism photographer isn’t going to find themselves in a hot market…however someone who is willing to wade into that field, be excellent at what they do AND diversify their imaging abilities they could find themselves in a good position to grow with a hybrid industry that is still in blossom: Still/videography

Three tips for up and coming photographers:

1) Be the best photographer you can be and find ways to be better.

2) Learn and shoot video too. Check out the likes of Devin Graham who is taking YouTube videos to a new level and making money doing it. Besides even for photojournalists, this is the digital age and videos are part of image reporting now.

3) Do what you love. If you don’t really enjoy the work and toil of photography, find a way to make it enjoyable or do something else that you  do love and go be the best at it!

Here’s an interesting article about the editing of opinion articles–which is what I consider a blog even from a news writer — in the Washington Post.

On Wednesday, Bill Turque, the Washington Post’s education beat reporter, posted an excellent blog item showing his readers a little bit of the inside game at his paper. It was titled “One Newspaper, Two Stories”—a title that, by the end of the day, would become more apt than Turque ever could have expected.

That’s because editors pulled the post off the site Wednesday night, replacing it hours later with a new, dialed-back version.

So how much free speech is free when your own editors re-write and don’t indicate that they changed your work? Sure some editing is part of an editor’s job but an opinion article that no longer expresses the writer’s opinion seems to be off track.

What do you think?

Journalists are taught to be a “Fly on the wall” observer who records but doesn’t make the news. Well, that’s nice in theory and there are times when journalists should be just that, but there are other times when a journalist overcomes the shyness of the observer and ends up getting involved. Here are two examples… 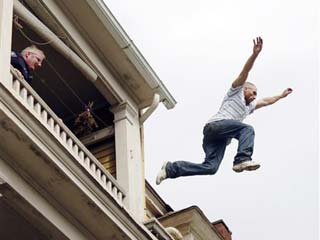 The Sun Journal newspaper reported that photographer Russ Dillingham was credited with helping police capture 35-year-old Norman Thompson as he tried to flee from local police and federal agents.

via News Photographer Tackles, Apprehends Fugitive on the Loose –

And in the recent coverage of Haiti’s Earthquake recovery…

Several media ethics scholars have criticized the broadcast and cable news networks for allowing their medical correspondents to be shown performing emergency treatment in Haiti. via Contactmusic.com

The way I see it is that it’s more a matter of the purpose of the journalist’s intrusion into the story. If it is to get more viewers or to promote the journalist’s company or commercial interests, then I think it is completely inappropriate. If it is a human responding to a need or reacting to a situation, then I’m really quite accepting of the intrusion. It should still be reported clearly that the journalist was involved, but I don’t see this as a case of unethical behavior. I see it as human behavior kicking in. Honestly, it’s refreshing to see that journalists out there still have humanity’s reactions working in them! Remember Kevin Carter? He became notorious for not getting involved after he left an emaciated Sudanese girl under the watch of a vulture after photographing the pair in Africa. Even after winning a Pulitzer Prize in 1994, the things Carter saw especially in Africa be came too much for him to deal with and he took his own life. While I worked as a journalist/photographer for the Fort Scott Tribune, I found myself feeling like I knew the details but could do little to make a difference. Yet, those times when I did “only” write about things, the encouraging words of a reader or the public official who later told me of the response they received after an article I wrote were excellent reminders that even an unbiased report can stir people to action simply because a journalist did his or her job…informed the people. Thoughts?

In grad school, I studied Attitude Theory under Dr. Hamilton at Pittsburg State University‘s Communication Department. Below is the second part of my response to a final question about persuasion and human attitude theory.

Let’s return to the persuasion techniques suggested by the literature. First, consider rational arguments. By appealing to the rational mind of the reader, the editor is able to suggest reasons for thinking a certain way and therefore argue why the reader should accept the new viewpoint or take a suggested action. Secondly, consider assertiveness. Using an assertive approach, the editor can tell the readers why they need to take on the new mindset or action. Often this assertive approach uses fear or dislike within the reader to bolster the arguments.

For example: An editor writing against a proposed nuclear power plant in the area could use assertive statements like, “The threat of nuclear contamination would be playing in our own backyards.” This statement could prey upon fears the reader may already be experiencing. However, for the highly involved readers who think this would not be a threat or have been convinced that the plant is highly beneficial for economic reasons, such arguments could cause them to swing to the rational argument that the assertive fear-inducing argument of the editor is simply not reasonable. Therefore, they might conclude, the editor himself is not a credible source for information.

END_OF_DOCUMENT_TOKEN_TO_BE_REPLACED

In grad school, I studied Attitude Theory under Dr. Hamilton at Pittsburg State University’s Communication Department. Below is my response to a final question about persuasion and human attitude theory.

The debate about persuasion is one that theorists have long been questioning and the debate is still out. However, my research shows that there are techniques that at least help bring the recipient closer to a place of persuasion. According to my research concerning editorials and persuasion, editors and scholars have a variety of opinions about whether editorials should attempt to persuade readers to a certain point of view.

Through a survey of editors in the Midwest and research in the literature, I found that there are specific purposes for editorial pages. The three purposes were as follows:

In the non-scientific survey that I used to question editors, I found that editors often related an editorial that they said persuaded people to act in a certain manner. This suggests that people can be persuaded, but I think this is glorifying the ability of editorials a little much and down playing the rational mind of readers. I agree that editorials can have an influence on the thinking patterns of readers and contribute toward a persuasion, but I have yet to see any study that eliminates the many variables involved in such a public attempt at persuasion as editorials. Therefore, I concede that editorials can be contributing factors toward persuasion, but I would provide rebuttal to the editors examples. One Joplin Globe editor said they wrote an editorial about city police officers patrolling on I-44. The police department later changed its policy (the editor attributed this change to his editorial), but I suggest that by placing issues in the public eye, the fear of public disapproval or even the lash of the public tongue is more influential than the actual editorial itself. Yes, this is part of the process that caused the persuasion to change but a sole contributing factor? I don’t agree.

While research shows that editorial pages are the second most highly read pages in newspapers, I suggest from my own experience that the people who read the editorials carefully are those who are highly involved in the issues addressed in the editorials they read. The research shows that those highly involved people are more likely to develop counter-arguments to the arguments toward a certain viewpoint proposed by the editor.

Therefore, the consequences of attempting to persuade high-involved audiences is more likely to be negative rather than positive. Still, there are many readers who may be persuaded. Research suggests that there are several persuasion techniques to use:

END_OF_DOCUMENT_TOKEN_TO_BE_REPLACED

“They” say you can miss the forest because of the trees, but many times it’s easy as journalists to show the forest and fail to let people know what the “trees” are really like. I’ve had times like that. When I worked at the  Fort Scott Tribune, I found that forest in things like the summer street festival that I’d covered year after year or the school board’s monthly meetings. Yet, it was by stepping closer and closer that I started finding “trees” that helped both me and my readers find out what an interesting thing these forests really are. Here are four tips that I’ve found help me take a step closer:

————–<p>Michael Shead is a photojournalist and writer with experience in small town journalism as well as Â international video documentaries. He serves as Communications Director at Resurrection Life Church in Grandville, Michigan. He also teaches photojournalism at Cornerstone University.