I love Denver Water’s minimalistic approach that is eye catching and effectively communicates their message: “Use only what you need.”  Below is one part of a wider campaign they did starting with a park bench. 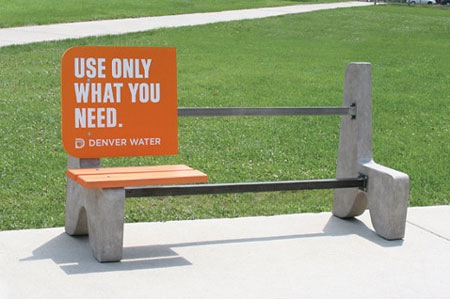 ‘Use only what you need’.

See more of the marketing at  Nothing replaces water. 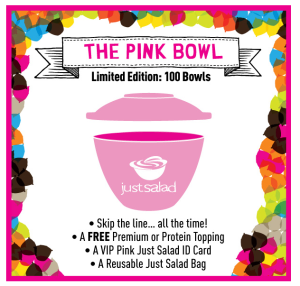 Just Salad gave a great example of how to create buzz with people who already love their product: Faithful Customers.

They sent out 100 skip-the-line pink bowls to faithful customers and then promoted the concept and the buzz took things from there. 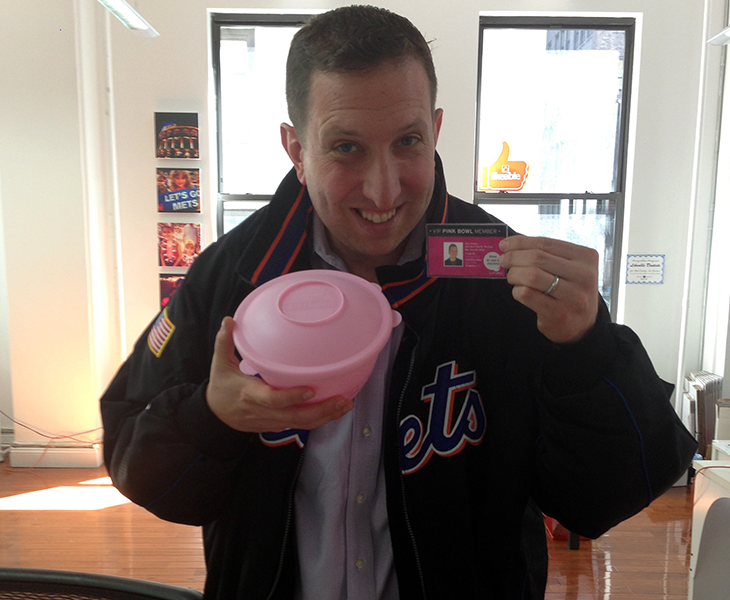 A happy Customer who blogged about his pink bowl experience!

Personally I’d never heard of Just Salad, but that may have something to do with me living in a third-world-country. However, I felt myself wishing I had a pink bowl from this restaurant and I could skip lines for a fresh salad! In fact, I think the TSA should  provide this sort of thing for lines at the airport! I can see it now…” Hey! You can’t cut in the line…Oh, sorry, I didn’t see your pink carry on bag. Come right on in!”

Ok, so that’s dreaming a bit. However, I think Just Salad did a great job of getting their name out there AND rewarding those who have been faithful to their business.

“For the cost of a bowl, shipping, and a free topping, $20? the small business reached thousands of customers and prospects.”

via How to Create Word of Mouth Magic | LinkedIn.

Looking for that news hook? Newsjacking may be exactly what you’re looking for!

Read David Meerman Scott’s book…’cause he wrote the book on Newsjacking! His perspective on connecting news stories with your product or business can be a great way to get yourself in the public eye. Just be careful what news you jack or you could end up with a black eye.
On Nonprofitmarketingguide.com, Kivi Leroux Miller describes how how you can get yourself in the second paragraph of news stories if you learn how to respond quickly to the news of the day!

It works like this: a news story breaks. Journalists are under pressure to update that story for the next edition or broadcast. So while the core of the story (the first paragraph) doesn’t change all that much, the second paragraph does, with additional details or insights or related quotes. That’s your chance to swoop in with something a reporter can use that’s related — but not necessarily essential — to the main story to freshen it up. Then your part of the story gets repeated as other media outlets pick up the story. ~ Miller

Newsjacking can be done by commenting on the newstories and hopefully getting picked up like Remco described in the comments here.

I prefer the idea of having a relevant connection to the story that is interesting enough that it caches the attention of the reporter. It’s OK to use a bit of humor with this as long as you don’t go overboard, You can even newsjack serious stories as long as you keep them in good taste.

Here are some great examples from Scott’s book…

I love how the London Fire Brigade newsjacked the story of Kate Winslet saving Richard Branson’s 90-year-old mother from a fire.

Oakley Sunglasses did a great job of newsjacking when they jumped on an opportunity to give glasses to the sun sensitive 33 Chilean miners. They each received Oakley Radar sunglasses to protect their eyes as they exited the mine after their long ordeal below ground.  Estimates say that Oakley garnerd about $41 million in promotions for the $6300 worth of product they donated.

Newsjacking  can be a great way to tie-in your organization to the latest news, but just be wise about how you use this technique. There will eventually be a news story that relates to your organization but it may be one you want to stay away from or at least be really careful how you tie-in to it. For example, if the local pound burns down, announcing your hot dog dinner to raise funds to spay and neuter dogs in the county would be less than advisable.

Have you newsjacked a story? Tell me how you did it in the comments below! 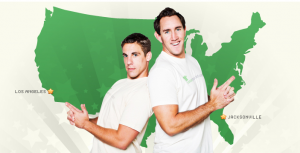 It’s part of a unique marketing ploy that is getting some attention across the blogosphere. iwearyoushirt sold out days for 2010 and are making progress toward filling up 2011. January, February, March, April, and May are sold out. The price of having your shirt worn by Jason and four others started at $5 on Jan. 1 and goes up by $5 each day for a full $1825 on Dec. 31, 2011.

Even Jason’s dog, Plaxico, is in on the shirt wearing. At $50 a day you can have your custom made t-shirt worn by Plaxico.

They even make the shirt for you!

Here’s how they describe their shirt wearing services:

“There is no other place on the web you can pay such a small price to have such an awesome community see your company/product/service/etc.” 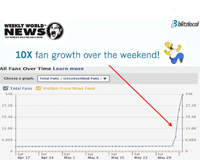 Building a fan base on Facebook can be something that you gradually grow or something that catches on like wild fire. Here’s how Weekly World News multiplied their fan base in a matter of four days.

Read the process they used here at

The reason I like Coca-Cola is because of what Coke is. It’s not so much the taste of Coke, (unless it’s made in Latin America with REAL sugar cane). It’s not even the fact that Coca-Cola is available all over the world and has one of the most widely recognized logos of all times.

Maybe it’s because my Grandma has always liked Coke, especially when it’s in glass. Even if she has to pour it out of a can, Grandma likes her coke in a glass. So, we buy the classic Coke bottles that come out around Christmas for her to enjoy.

What gets me is the brand and personality of Coke. You know, there’s the curvy bottle, catchy simple phrases like, “Always Coca-Cola” and “Enjoy” plus the fun that the Coke people seem to have with what they do. Just watch this video and you’ll see what I mean.

I see examples like this and ask myself. How can I be as joyful of a brand evangelist of the things important to me as Coke is of their sugar water?

In 2008, United Airlines broke Dave Carroll‘s $3,500 Taylor guitar. (Why he put it in checked luggage I’m not sure.) None the less, when he contacted the aireline about the damage them he was rebuffed and passed to someone else one too many times. In retribution, Carroll wrote a song…then posted it on YouTube and won fame as a consumer who activated the internet with a song that has over 6 million hits views so far. PR & Marketing for United…can you say, “ouch!”?

After they saw Carroll’s rant, Taylor got in on the opportunity with a good, although boring response.

Advertising on Facebook is convenient, easy to setup and can be pretty effective! We can select a specific audience by age, location, interests, etc. and then bid on how much we are willing to pay per click that we get. A nice thing is that we can limit our expenses per day so we don’t go over budget. 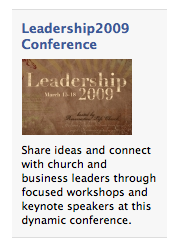 For our leadership conference we wanted to get the news out to the online crowd. Using Facebooks advertising we made one (see at right). We’ve drew about 13% of those who came to our leadership site through this ad.

To track traffic to our websites we make use of Google’s Analytics and run reports for leadership through the free tools Google provides. Pretty handy.