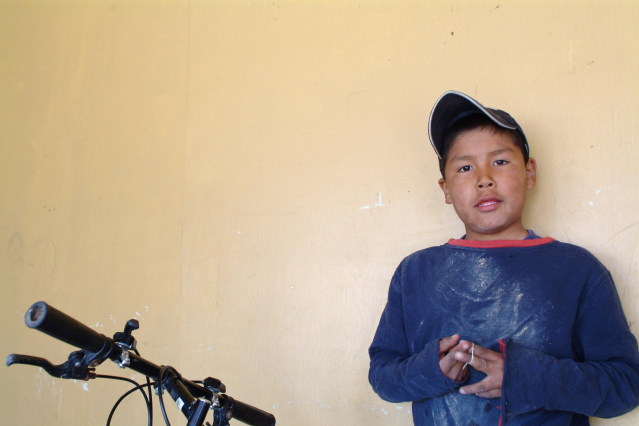 An Ojibwe boy lounges by his bike in Fort Hope, Ontario.

FORT HOPE, ONTARIO-Something was different about the twin-engine bush plane as it taxied to a stop on the dirt runway.
Unlike most of the freight and passenger flights that briefly land in this remote Canadian village, this plane carried 14 passengers who came to Fort Hope for one reason-to tell the Ojibwe people about the true hope they can find in God.
Led by Resurrection Life Fellowship pastor Jim and Judy Walters from Saint Ignace, Mich., the passengers were from Resurrection Life Church in Grandville, Mich. They came to help show the Ojibwe villagers what the Walters have been telling the local leaders for the past two years-that God knows them and wants them to know him personally.
Mission trips to Fort Hope began after the Walters had a remarkable meeting with a Christian Ojibwe chief in 2001. After months of prayer and calls to encourage the chief, the Walters made the first of what has become frequent trips to Fort Hope where they offer encouragement and Biblical teaching about building strong marriages and breaking spiritual strongholds.
“This is just a pocket of hopelessness,” Judy Walters said. “How can we say no? How can we stay away from here?” 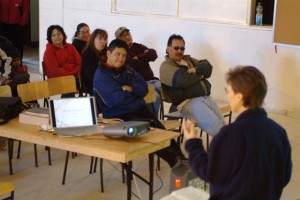 Jim and Judy (pictured) Walters teach about building strong marriages during a seminar held at the village meeting hall in Fort Hope, Ontario.

Along with the Walters, mission teams from ResLife are helping show the people there is hope and point them in the right direction. Even with the short-term teams, the spiritual needs in the village require a long-term response-a commitment the Walters have willingly made.
“That’s one of the things the chief told us,” Judy Walters said. “He said, ‘Please don’t just come once and go away and forget us. Come back.’ So we keep coming back again and again. God’s heart is for these people.”
Indeed, the Walters have gained a heart for this Ojibwe village where they gladly travel 12 hours for each visit.
Located less than 1,000 miles from the Arctic Circle and only accessible from the air for most of the year, the Ojibwe living on this tiny reservation have learned to survive the wilds of northern Ontario, but their chief, Charlie O’Keese, wants to help them do more than just survive.
Faced with the social woes of alcohol, drugs, incest, suicide and broken families, O’Keese-a Christian himself-has been praying for a way to teach his people about the life God has in mind for the 1,200 people who live at Fort Hope. 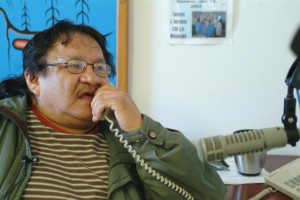 (Then) Chief Charlie Okees takes a phone call while taking a break from making announcements on the radio. The night before this photo a local residence burned to the ground.

“I want to see a Christian training center in our community,” O’Keese said. “We need more Bible teaching.”
With the help of the Walters and teams from Resurrection Life Church and other churches, the practical Bible teaching O’Keese has been praying for is starting to reach the people.
“Every time we come, we’re reaching one person or we’re reaching two people or six people, that’s how you win them-one person at a time,” Jim Walters said. “It’s not an impossible task and with God’s anointing upon not just our ministry, but the other ministries that are working with us, we can see things turn around in these remote villages.”
With each trip and each team that goes with them, the Walters are seeing a change in the people.
Already the villagers are showing openness to the idea that there is more to life than merely struggling through life’s troubles. They are starting to recognize that the truths in the Bible are for people everywhere.
After a recent marriage seminar, the Walters reported that several adults responded with requests for prayer and a desire to have the lives and families they heard are possible with Christ.
The Walters continue to minister at their church in Saint Ignace and make trips to Fort Hope. Future plans include taking a team of Christian youth to minister directly to the teenagers of the village.
“God is wanting to do something in the lives of these people,” Judy Walters said. “So we keep coming back and we’ll keep coming back as long as God keeps the door open to us.”