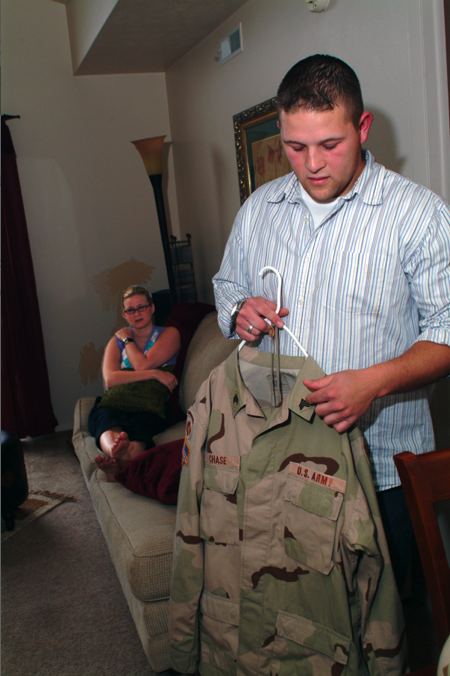 Sgt. Chase hangs up his fatigues knowing he'll probably have to put them on again soon. His fiancee watches from the background.

Dodging potholes at 63 miles per hour while knowing that your 40-foot truck and trailer could be in the sights of someone’s AK-47 can teach a man a few things about life—things like how to change five flat tires in 10 minutes and that your life isn’t always under your control.

Those are some of the lessons Kevin Chase learned while spending 11 months with the U.S. Army in Iraq.

While Kevin was growing up in western Michigan, he daydreamed of being in the military. One year after the terrorist attacks of 2001, he decided to start living that dream and signed up with the National Guard. His training began in the spring of 2003.

In November of that year, Kevin and his girlfriend, Sarah Haan, were riding down the street when he got the call they knew could come at any time.

“I didn’t know who it was, but I could tell he was being activated,” she said.

Kevin was going to Iraq.

One week before Christmas in 2003, Kevin and 171 other soldiers from the 1462nd Transportation Company of the National Guard based in Howell, Mich., left for Fort McCoy, Wis. For three months of training to prepare for their duties in Iraq.

With the military making decisions that affected his entire life, 22-year-old Kevin was learning lessons about trust and control.

“You just kind of learned that you’re not in control of your life,” Kevin said. “I’m not in control, and it’s OK. It’s really helped me learn to depend on God.”

In March of 2004 Kevin and his unit left the cool woods of Wisconsin and flew to the warm sands of Kuwait. They were soon on their way to Camp Anaconda in Balad, Iraq—about 65 miles north of Baghdad. Their job was to transport “anything and everything the military needed.”

During their 11 months of driving Iraq’s roadways, Kevin and his unit logged 1.5 million miles driving supply convoys on 300 missions. On 120 of those missions they came under attack from insurgents.
Attacks ranged from small arms fire to roadside bombs and mined potholes, but even through the dangers, Kevin said he could tell that his trust in God allowed him to focus on his job rather than being nervous or trying to control uncontrollable situations on his own.

Worrying wasn’t going to help anything, he said.

Back in Michigan, Sarah was also learning about trusting God.

“I think the biggest thing was learning to depend on God and not on anyone else,” she said of the year Kevin was gone.

While the two kept in contact through e-mail and instant messaging, Sarah said Kevin’s absence caused her to develop more of a devotional life because of the peace she found through a stronger relationship with God.

“God gives you the peace and you take it day by day,” she said. “You just trust God that it’ll be OK.”

The trust they were both learning was tested, but never broken.
While attacks on the convoy were common, Kevin said he and fellow soldiers read Psalm 91 for encouragement and other soldiers asked him to pray even though they said they didn’t believe in God. Those prayers were answered. By the end of their tour, no one in their unit had been killed and fewer than 30 suffered serious injuries.

On Feb. 15, 2005, Kevin and the rest of his unit arrived back in the United States where they were welcomed with open arms and tears of happiness. Now that Kevin is back, he works in Kentwood
doing computer drafting while studying at Ferris State University. He and Sarah attend Resurrection Life Church and are planning their wedding for October.

During his time in Iraq, Kevin was promoted from Private to Sergeant. Even though he’s not supposed to be called for a year, both Kevin and Sarah are well aware of the possibility that he could be sent to Iraq again.