New bidders must learn to understand the auctioneer and the rhythm of the auction song that may seem unintelligible to the untrained ear. The way auctioneers move their lips reminded me of a baby blowing his lips and letting them flap in the breeze or of someone imitating the Warner Brothers cartoon character Porky the Pig who ended cartoon shows with “bdib, bdib, bdib, bdib, that’s all folks!” 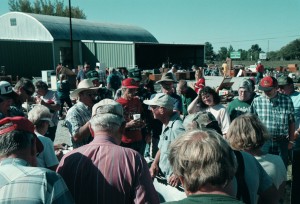 While auctioneers do not have the legendary reputation of used car salesmen, they are known for an occasional exaggeration. I once heard of an auctioneer who said he never lied…unless he had too. Maybe they don’t lie, but they do try to look on the bright side of their products.

At the AHSC, the auctioneer opened bids on an “antique table” that was nothing more than an extremely warped table top made of pressed wood drooping over a supporting frame on four old turned table legs. Keeping a rosy view of his products, the auctioneer claimed, “Put a new top and you’ve got a nice table”.

Later, while trying to sell a large squirrel-cage fan, the auctioneer assured everyone that the fan worked and had been used in the building standing nearby. “It kept blowing out the end of the building,” the auctioneer said of the fan. “That’s why he’s getting rid of it”.

I don’t know if the people believed him or not, but the fan never sold while I was there. By the time I left the auction the fan had been sitting on the lot for several weeks. Who knows how long it sat there before I came.

Any new member who thinks auctioneers only speak of prices during their fast talking outburst need only to listen to quickly realize that the auctioneer is talking about more than just money matters. With quips and remarks about the products on hand, the auctioneer adds humor to his monologue to help keep the crowds attention and support. The auctioneer’s humor helps to promote positive attitudes, trust, and the greater likelihood of a sale whether the buyers really want the item or not. Knowingly or not the auctioneer is taking advantage of ideas about humor that theorists are trying to understand. Lyttle (2001) es that “people who are in a good mood are less likely to disagree with a persuasive message ” (para.5). The auctioneer’s humor helps persuade the bidders that the items-from the best to the worst-are worthy of their consideration.

In joking about the items up for bid, auctioneer Jack Gamer added humor to the mix when he commented on a few of the products being sold. While selling a large vase and a paperweight the auctioneer called the vase a “martini glass” and decided to sell the paperweight with it.

“You’ll need it [the weight] after you drink that martini,” he joked.

Research on the use of humor in communication also suggests that use of irony and humor increases the audience’s liking for and trust in the source while also increasing the persuasive power of the source (Lyttle, 2001). Besides adding “spice” to the situation, Lyttle (2001) notes that humor research shows that use of humor can compensate for weak arguments as well. I found that the auctioneer made use of this part of humor quite often and the crowd seems to like it. When the auctioneer makes comments on the items, the crowd of bidders seems to enjoy the interaction and often responds with a grin or a laugh.

Once, while taking bids on a knife made in Pakistan the auctioneer said, “You’d better buy them because there might not be a Pakistan [very long]”.

While the probability of war in the East had been on the minds of many of the people at the auction, the auctioneer was taking advantage of this to draw the bidder’s attention. I think he was talking so fast he probably didn’t even realize the difference between Pakistan and Afghanistan.

Besides lightening the mood, humor also is a tool the auctioneer uses to reinforce a sense of community at the AHSC. Humor requires shared ideas between the source and recipient or it would not be understood. Thus, the humor that elicits a response shows a bond that hints at underlying values that are held in common by the group (Lyttle, 2001). While the humor contributes these different aspects, it also draws attention to the auctioneer as he warms up for the next item. In this way, the use of humor is a sort of pick to “break the ice” and involve the crowd, “smooth discomforture and entertain” all at once (Booth-Butterfield & Booth-Butterfield, 1991, 205).

Whether adding humor to his song or orating his positive view of his products, the auctioneer is always a quick talker. During one of my observations in October, 2001, the auctioneer was moving down an aisle of items when he asked why no one wanted to buy a certain wheelbarrow:

A bidder replied, “It’s held together with a bungee cord!”

The auctioneer was quick with a positive reply, “That’s what makes it so good”.