On my first visit to the auction, I parked in a grassy spot next to a long row of cars, trucks and trailers and made my way over to the rows of merchandise where potential buyers were perusing tables covered with all types of auction items. There were antiques, tools, furniture, household items, exercise equipment, books and plenty of junk. You name it; they had it or would gladly substitute something else in its place.

On first glance, I didn’t see the community I’d come seeking. It looked like an organized business. Items were numbered, people were there to buy and inside the auction barn a faded sign read: “Not responsible for breakage, Not responsible for accidents, Commission 15%.” 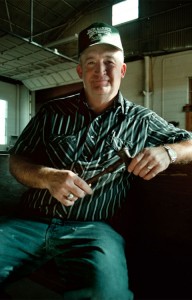 Accepting that first impressions can often be deceiving, I started looking deeper and began to see groups of people loitering about the lot as friends, associates and acquaintances met to chat before the bidding began. There was more to the activities at this cement and metal building than first met my eye. A business it was, but the Columbus Auction had become a place of interaction-a place where people gathered not only for the products that were sold, but also for the social interaction they found and the friendships they built there. The attendees at the auction developed a community that has been “created and sustained by everyday [in this case, weekly] patterns of human interaction that take on shared meanings among members of a particular group” (Adelman & Frey, 1997, p. 5). After observing the auction and the strong social interactions that took place there, I dubbed it the Auction House Social Club (AHSC): A place where people buy a little, sell a little, and share a lot.

In my mind the AHSC is not that different from a country club or weekly social gathering. Like a social club where the product being sold is a meal, a game of golf, or access to a swimming pool; the products sold at the auction were the loosely tied twine that kept the members involved as relational bonds were built and a community emerged.

While interactions among members of this community are only loosely knit together; repetition of shared events; exchange of information and stories, and the common location of the auction all contributed to the building of a sense of community. Items and places are the visible bonds of an invisible relationship called “community”. As Bird (1999) writes of her email fan group, the AHSC members built a greater sense of community through exposure of self and expression of ideas as they talked about the objects and situations surrounding them in the places where they are linked together.