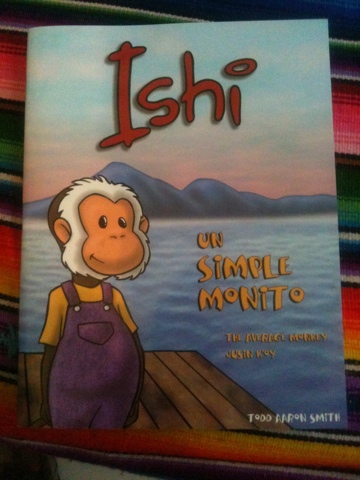 Ishi, Un Simple Monito (Ishi, the average monkey), published in 2008 (ISBN 1-930992-23-8) is a beautifully illustrated book by Todd Aaron Smith that helps children realize that they are unique, valuable and special.

Written in English, Spanish, and the Mayan language of Quiche, the story is set in the Guatemalan highlands and features native animal characters like the quetzal, Guatemala’s national bird and namesake for Guatemalan currency, jaguars, and of course, Ishi, the monkey.

The artwork depicts many features of Guatemala including volcanoes, cornfields, futbol and more.

From what I understand, Smith originally wrote this book for and featured his adopted Guatemalan daughter as a secondary character.

We’ve been able to help distribute some copies of this book in the Guatemalan highlands among the Quiche Mayans.

Part of the Mayan Children Missions Project, this book has the unique feature of being in three languages.