At the Columbus Auction, there was a myriad of characters who paraded down the auction aisles every week and each character had a part to play. There was window man, carousel lady, auctioneer, assistant, junk dealer, antiquer, entertainment seeker (who just came to see the festivities), and, during my time at the auction, the participant observer among many others.

Attendance at this masquerade was a required part of the membership fee at the AHSC. While reasons for attending were unique to a person, each member chose to be there week after week because without them the AHSC would not exist and their presence would be missed.

Each member played his or her part in the masquerade. For the crowd, the masks remained up but, in private circles, members relaxed in the shade and masks fell aside revealing a common denominator. As members, everyone was a participant-friend. Those who returned to the auction floor maintained their role in the masquerade, but those privileged to the conversation knew they caught a glimpse of the man or woman behind the curtain.

In October of 2001,I met the masquerading window man in a moment of repose. As the auctioneer slowly made his way down a row of items, 73-year-old Bill Osburn sat on a small table waiting for the auctioneer to reach an item he had his eye on. Like a golfer waiting for his turn on the green, he sat in the sunlight just watching the activity around him. His worn plaid shirt was threadbare in places and both his shirt and pants showed specks of white paint that had splattered during a recent painting project. He had an easy-going demeanor, a will to talk, and stories to share to listening ears.

“I grew up in the 1920s,” he told me. “I’ve been a plumber, bellboy, and even worked for a tanner, but now I do some painting and sell windows. That’s mostly what I come to the auction for-windows.”

Although he masquerades as the window man at the auction, Bill lowered his mask to reveal what he really loves to do-play the guitar and sing.

The old man took me over to his truck and played a few tunes on his guitar. One of the songs he sang was made famous by country singer John Michael Montgomery. The song told about a romantic relationship that began at an auction: 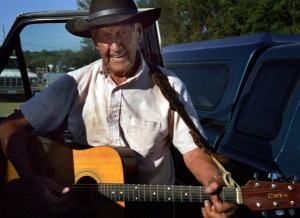 Bill Osburn breaks from the bidding area to play his guitar for me.

Even country songwriters have recognized the relational value of auctions. In their song Fagan and Royer romanticized the relationships that can be built when people get together, communicate, and find common ground in the things that bring them to that location.

While the unmasked Bill Osburn has a hankering for the six strings, at the auction he was after a friendly chat and a few windowpanes.

As the old man told me about why he comes to the auction and sang a few rifts, I watched his weather worn face as he looked out from under the shady brim of a black felt cowboy hat that sat atop his silvery white hair. There was nothing out of the ordinary about the hat; it just seemed to be a part of Bill Osburn. Others must have thought the same about his cowboy hat costume because he’d even gained a nickname relating to his hat.

“I’ve got a lot of nicknames,” Bill said. “The auctioneer even calls me Black Jack.”

“Black Jack” fit the old man like the hat fit his head. It just seemed right.

I saw Black Jack week after week and came to know his signature hat as a sort of trademark that set him out from the crowd of bare heads and baseball caps. After looking over the items up for bid each week, I’d scan the crowd for that black hat and make my way over for a short chat. It worked every time until several weeks into my observation. I couldn’t find the black hat.

I finally caught a glimpse of a black hat. But no, the face beneath it was not familiar. I realized that Black Jack’s hat had become an identity marker like a flag to me. That black hat symbolized who Black Jack was. Always before, I’d found the old man by his hat. Not seeing Black Jack’s signature hat made me start to wonder if this friendly acquaintance would be there that day.

I proceeded with my observation and noticed that the auctioneer was about to sell a set of aluminum-paned windows. If Black Jack was there, he’d bid on those windows. I knew it. But as I gazed around at the crowd, I still didn’t see his black hat. After the bid on the windows was over, I turned around to walk away, and there was the bid winner: Black Jack. He was dressed the same as usual, but his brow was sporting a new gray cloth hat with a small brim that provided no more than a small strip of shade to his worn face.

“Hi! I was looking for your hat but couldn’t find you,” I told him.

“I got this one and have been wearing it since,” he said. “I thought about wearing dark glasses and seeing if anyone recognized me, but people here would. They’d say, ‘Hi, Bill.'”.

Black Jack knows the people of the auction. He’s been around the Auction House Social Club’s membership masquerade long enough that he not only is a member in good standing; he’s become a pillar that people recognize even when he changes his costume.

In other circles, Black Jack has yet to reach this status of membership. Several weeks after this incident, Black Jack had changed his hat again-this time to a woven straw cowboy hat. I asked him about the change, and he told me about a time he’d been snubbed at a musical event because he changed his hat:

I was at a sing wearing a different hat than my normal one when I saw some friends of mine. They didn’t even say, “Hi.” to me. So, when I met up with them later, I asked them why they didn’t talk to me at the sing and they said, “Were you there? We didn’t see you.”

“It must have been because I changed my hat,” he said.