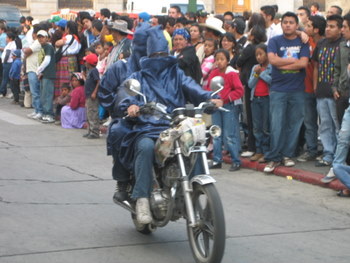 Students take a week or so off of classes right aroundThe parade in action!

Semana Santa (in 2011 it was the week plus a few days prior to Semana Santa) and on the parade day (also called the “Huelga de Dolores” parade)  they take to the streets dressed in masks that look like colorful Ku Klux Klan outfits or Halloween costumes.

In a huge parade that draws many observers, the students ply the crowds asking for donations and pulling bystanders into their antics on mopeds and motorcycles. 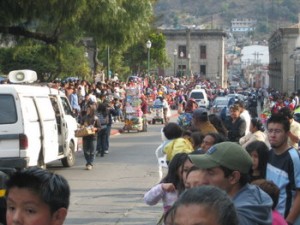 The parade in action!

The rough floats are hauled through the streets on smoke belching trucks accompanied with loud music and louder rants from angry-sounding students. Traditionally the students march to voice complaints and demands for social justice or to call attention to a problematic political atmosphere.

Sadly this display is not as harmless as it may seem at first. If you speak Spanish, be wary. Their rants contain very raw language that would make a sailor blush and scurry on home. 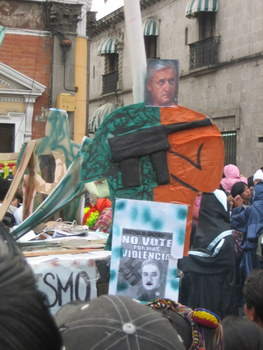 The student groups that lead these actions visit local businesses “asking” for donations to help with their group. If a business declines to give money, they discover that the “request” comes with a unhealthy dose of distortion. They may end up with black paint or oil coating the front of the business when the students are done.

From what I understand about University San Carlos, this public university has a colorful history. Universidad de San Carols De Guatemala is one of the first universities in the Americas with it’s founding dating back to the mid-1670’s. The Huelga de Dolores started back in 1898 and continues to provide an outlet for students even though much of it has become distorted and the student groups now use the money for drinking and lining the pockets of leaders. This university also has a history of persecution during the long Civil War. This persecution is one reason for the masks that the students started wearing to protect their identities since 1971. The colors of their hoods apparently are specific to their departments. While protected from governmental and police/military interference on their campuses, students who venture out into public and voice their complaints don’t want to be identified…thus the masks.

You can see more Desfile photos here or read more about the Desfile Parade here.